Active GyroCam
The Active GryoCam is a gyro-stabilized device that allows you to take clearer video using either your cell phone or an external camera. It leverages the internal sensors on the phone to detect its orientation and maintain a level view. The device is actuated in two degrees of freedom (roll and pitch) and is actuated to cancel out any movement along those axes. It uses USB communication to communicate between the cell phone and microcontroller and has interchangeable camera mounts to give the option of taking video with either your smart phone or an external camera such as a GoPro. The control calculations, communication, and video recordings are all handled in separate threads within the phone's processor.

Using this device, you can take stabilized videos even during an activity, such as motorcycling, skiing, or rock climbing - activites that involve many twists and turns. This makes it easy to take videos that everyone can enjoy without getting dizzy or nauseated from having to watch video footage that rotates side-to-side and up-and-down along with the motion of the filmmaker. Unlike software image stabilization, which removes small vibrations from videos, this mechanical solution provides a means to eliminate large-scale rotations of the camera frame.
Educational 5-Bar Haptic Device
My partner and I built a planar, 2 degree-of-freedom haptic device for educational use. The design is based on a 5-bar mechanism. We wanted to build a device that would have the versatility to teach various concepts, but would still be relatively affordable (as the goal is implementation in classrooms). For this reason, we designed a device without a graphical display, that instead uses physical slides that can be changed by hand in order to demonstrate different haptic environments. The core learning objective of our device was to teach about potential fields, such as gravitational or electrical fields. However, it is important to note that the device is adaptable to virtually any planar task (such as navigating mazes or drawing mathematical functions). After building the device, a group of 50 high school students and several high school teachers tested it and responded positively as to its potential for classroom teaching
In this video, we show several gravitational environments that we setup in addition to a positive and negative potential field.  In the potential field, the device is repelled from the positive potential and drawn to the negative potential. 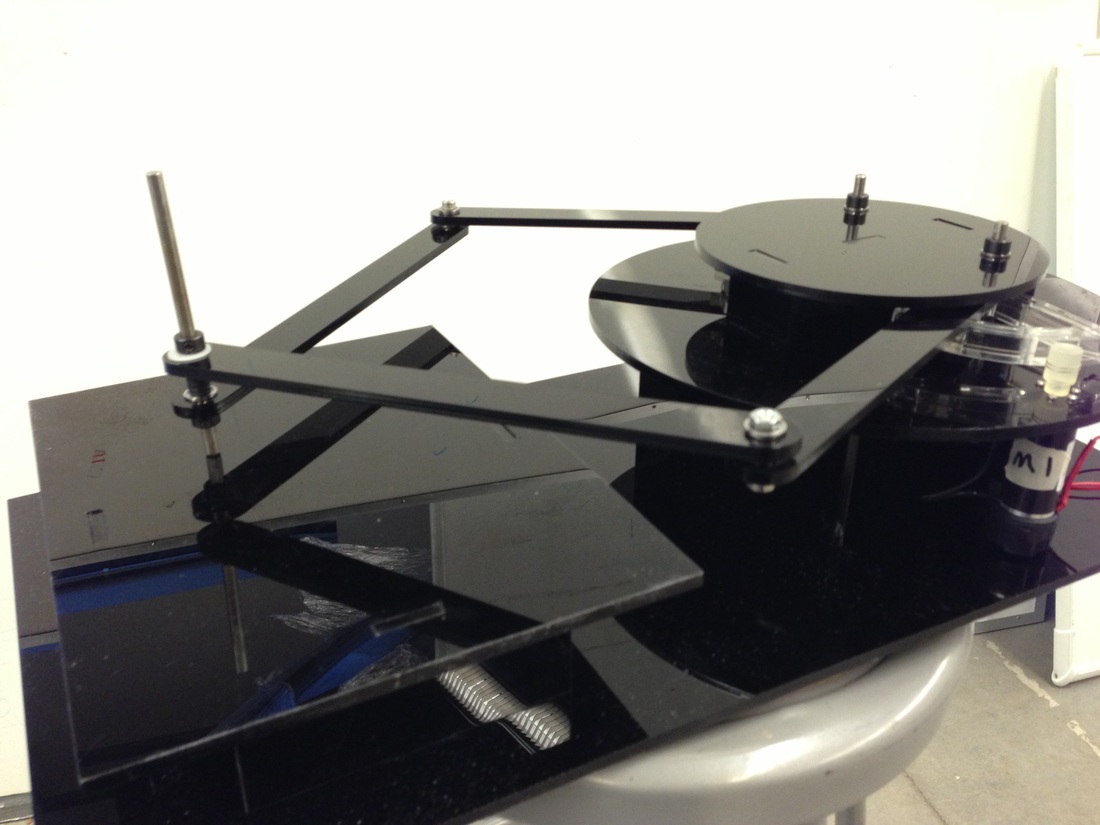 We evaluated the Jacobian condition number at various portions of the workspace (Left). Additionally, we evaluated the possible output forces throughout the workspace to ensure compelling haptic rendering (Right).
BlackPearl Water Vehicle
We built a novel teleoperated vehicle to compete in various competitions.  The vehicle used a chariot design with two chain-driven wheels that pulled the floating tail behind.  The controller used force sensitive resistors and accelerometer signals to sense the user intent and used a Xbee wireless module to communicate with the vehicle. Most teams chose a purely floating solution - our novel wheel driven solution with height adjustable chariot enabled us to perform extremely tight maneuvers such as spinning in place. 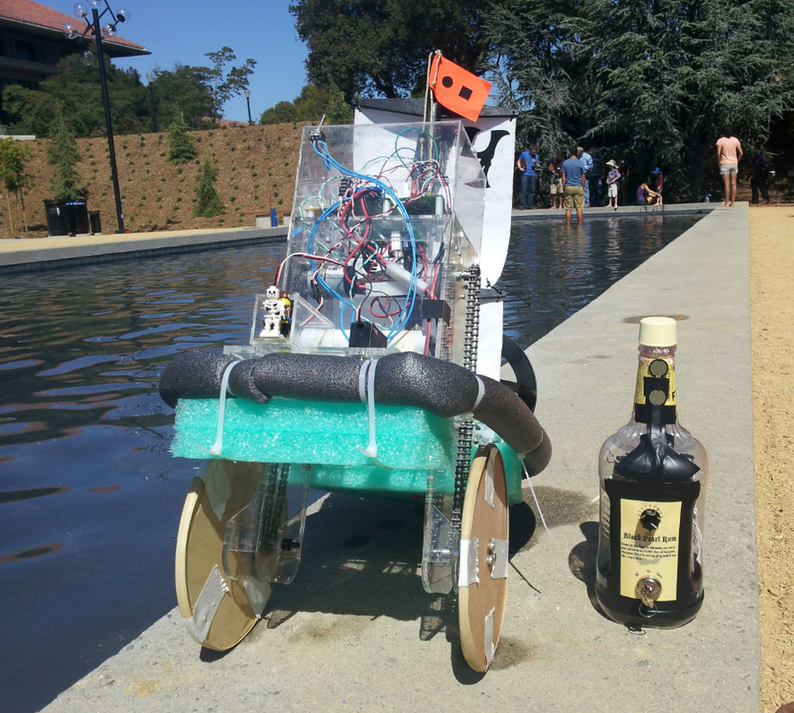 Wall-E Autonomous Ball Gatherer
Our team built an autonomous ball gatherer named Wall-E.  Our bot used IR beacon sensing to determine its location and could also follow the stage walls using a short range and long range IR sensor with PID control.  Additionally, bump sensors were implemented to determine when the bot was in contact with the stage walls.  After gathering sufficient balls, the bot would locate a desired bin through IR sensing and maneuver there to deposit the collected balls.  Then the bot would manipulate the center divider in the platform to defend the highest priority bins.
Chunky Monkeys Mechatronic Game
We produced an interactive game where 3 monkeys climb down trees towards the game player.  It is the player's responsibility to keep the monkeys from reaching the food at the bottom using an IR gun and waving them away by covering the food. The monkeys were driven by DC motors and a servo actuator measured the time left in the game. We used IR LED and phototransistor sensors to detect player waves and also to detect the gun "shots".  The gun also vibrated to indicate hits through an embedded eccentric mass motor.
Remote Activation of Packers in Open-Perforation Significantly Deviated Wells
I co-led a team of 14 members in developing a remote activation system for downhole tools that can function in open perforation wells. The system should be capable of fully activating downhole equipment within two hours, and must be capable of operation in a subsea environment at well depths up to 30,000 ft with conditions up to 20,000 PSI and 350° F.  Furthermore, it was desired that the system have a service life of 15 years and that it be resistant to corrosion due to both H2S and CO2.

After a concept generation process where we analyzed customer needs and the overall system, we developed a number of concepts to present to Schlumberger and ultimately decided to pursue communication using a magnetic inductance repeater system.  Magnetic inductance addresses some of the problems associated with electromagnetic wave propagation such as very large attenuation dependency on the medium. Since the magnetic permeability of water and air are relatively similar, the ability of the magnetic induction signal to travel should largely bypass the limitations of the downhole environment. At Pickle Research Center, we dug a 100 foot trench and tested our implementation on actual production tubing submerged in water.